Majority of the PC or Android users loves to browse the internet through the use of Google Chrome Browser which is having magnificent features as compared to other equivalents like Internet Explorer or Mozilla Firefox. In fact, many of Chrome’s features are implemented with the help of its related programs, which are usually only visible on Task Manager. Software Report Tool is a good example of how these programs benefit and sometimes trouble users. In this tutorial, we are going to introduce 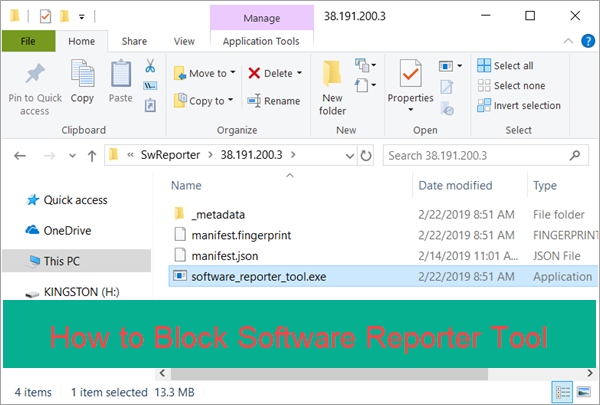 What is Chrome Software Reporter Tool

Software Reporter Tool is pre-installed in Chrome aiming to detect suspicious activities and add-ons that could be overlooked by antivirus programs. Simply speaking, software reporter tool will report the issues to Google so that the developer could make the desired changes in the algorithm to protect the users and to enhance the browsing experience of the users in the future.

Why to Block Software Reporter Tool

Yes, just two points, but a lot of people may be uncomfortable with them. Now we are going to extend to more details about the two concerns. Please move to the next part if you are eager to block Chrome Software Reporter Tool.

Talking about the limitations of this software reporter tool, the first point which we should like to mention is that it doesn’t take the user permission to send the reports of scanned PC to the Google. Maybe it is asked in the privacy policy of the Chrome browser while installing it, otherwise it is not present anywhere. The whole data present in the hard drive is scanned.

Tip: In case you lose important files due to computer virus or hacking, don’t hesitate to use iReparo PC Data Recovery software to rescue the files as soon as possible.

The second point is that when the Whole PC is scanned, then an extra load is made on the CPU of the PC which in turn makes the overall performance of the PC down. It may cause extra heating in the PC and you will not be able to recognize this activity due to lack of knowledge about this issue. BTW, you can also learn how to fix Service Host high disk usage which is another common cause.

If you want to get rid of Software Reporter Tool only because it is slowing down your computer, then there is an easy solution for you.

The steps will solve the issue immediately. However, it is possible that the problem would appear again.

If you want to solve the problem permanently, or just want to remove Software Reporter Tool from your computer for any reasons, just have a quick look on the detailed steps which are involved in this method to block software reporter tool.

After disabling the permission, the software reporter tool gets blocked. No one can access the SwReporter folder and install the software reporter tool. This will result in the blocking of all the activities which is not in your consideration. The scanning of the system will also get blocked which will avoid slowing down CPU performance from this factor. You will observe a very little effect while you browse on the Chrome web browser and it is negotiable if your CPU doesn’t support or cannot bear high loads while the scanning operation is going on.

To conclude the things at one place, privacy is the most concerned issue among the users from all around the world and it will remain the most concerned issue till it is resolved fully. The software reporter tool is also concerned with the privacy users and that’s why users are looking for the complete solution to resolve this issue. Google ensures the users privacy will not be exposed in front of any user, but there is always a risk. If you are using any software package which is behaving as an alternate to the above-mentioned method, then you can share it in the comments section. You can also ask for any query if encountered in the comments section.