Bootable pendrive is very useful when we need to install a new operating system on a Windows computer after system crash, virus attack or hard drive failure. In order to create a bootable pendrive, however, we usually need some third-party tools, like Win 32 Disk Imager, UNetBootin, Rufus, to start the process. Here is the problem: what if you don’t trust any of the bootable pendrive software downloaded from the network? Actually, you can also create a bootable USB using CMD, the in-built Windows Command Prompt utility. 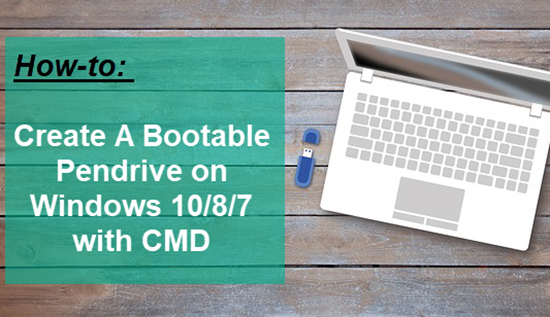 What is a Bootable Pendrive?

Before we embark on how to create a bootable pendrive using CMD, it is important that we learn about some common terms related to bootable USB flash drive.

It is important to know something about the terms in order to avoid possible errors occurring when you boot from a bootable USB drive.

How to Create a Bootable USB using CMD on Windows 10

Command Prompt is available on all Windows 10/8/7 computers, so you would not have to worry about downloading any new package or software to make your pendrive bootable. Nevertheless, you will need a USB flash drive and an ISO image file that contains Windows installation data for a clean install.

Note: Make sure to back up your USB stick to avoid data loss. Otherwise you may need to recover lost files from pendrive with a File Recovery Software.

Now, connect your USB drive to computer, then follow the steps below to create a bootable pendrive:

After executing each command line, there will have instruction for the next step. Please check them careful, especially when selecting the right disk number.

How to Boot from a Bootable Pendrive

Since you have just created a bootable pendrive for your desired Windows version, now it’s time to boot it and install the operating system on your computer.

There are various ways to boot from a pendrive. Here are some of the options that are commonly used:

If you find important data lost after installing OS with the pendrive, please try this method to recover files after reinstalling Windows system.

We hope that we’ve cleared up any doubts you would have regarding creating a bootable pendrive with CMD (Windows Command Prompt) and installing a new operating system with it. If you find this post helpful, don’t hesitate to share it on your social network. It only takes you a moment but will benefit a lot of people continuously.